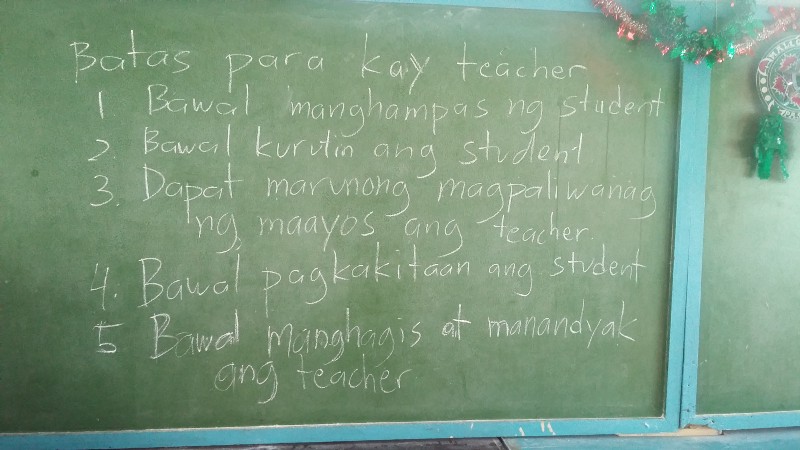 The premise is simple: Create five laws that every teacher must abide. A student raises a motion and the class votes whether this must be passed or not. After a few minutes of thinking and voicing out their opinions, they came up with these.

I then explained that this teacher who is standing in front of them is not Sir Ken anymore. Rather, he is now their new teacher named Sir Chico. I glared at every single student and in a menacing tone, I began.

They rose from their seats and they replied, “Magandang hapon po, Sir Chico.” Their amusement mixed with rising nervousness.

As they took their seats like how they usually do, I shouted at the top of my lungs, “At sino ang nagsabi na pwede na kayong umupo!?”

Some students froze and as a few of them chuckled at this change in attitude. I called out one of them and made him stand in front of the class.

In the next few minutes, the room was jolted into attention by this bully of a teacher – throwing erasers and threatening to hit students if they will even utter a word while the teacher was speaking in front. And when I was finally motioning to hit one of them, the entire class screamed “’Wag po, Sir Chico!”

At this moment, one of my students stood from his chair and replied,  Kahit na Sir, nakasulat po yan sa batas! Bawal mamalo ang isang teacher!” This started a chain of reactions as they recognized that what this bully was doing is wrong. One by one, hands rose and they started debating with me.

After that rapid, intense discourse, the activity ended. We all took a deep breath and proceeded with our lesson, connecting the activity with the importance of laws and how it strives to protect its citizens.

This may seem like just an activity for them but for me, this marked the day that they showed me two very important things. First, they knew what they deserve as students. Not just in what a teacher should do or not do but also what a teacher should be. Second, that they are able to defend themselves not in an immature way, but with reason, along with the passion to defend each another.

As their teacher, I am proud of the intensity that they showed today. I am proud of the progress that we have made: from the one word replies when we met on Day 1, to the slow progression of helping them answer in complete sentences. I am most especially proud that they stood up for themselves. Even if it was a controlled environment, they still recognized without cue that they had to stand up for themselves.

I end this little story with the hope that in the years that pass, no Sir Chico can belittle them ever again.

Teacher Ken Gillesania joined Teach for the Philippines’ 2015 Cohort this past June.  After graduating with a Degree in Management and a minor in Education, Ken now teaches students from West Fairview ES in Quezon City.