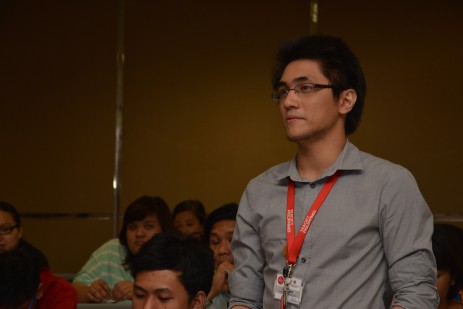 Gian asks Wendy Kopp a question during her session at Summer Institute.

We were told that she was a nice lady, albeit a little bit awkward, in the sense that she very simply spoke her mind sans the social niceties. Ms. Kopp’s visit was one that was both exciting and curious to us, especially to me. Given the bloated kind of picture painted by both her critics and her advocates here and on the Internet, I had felt as if her visit was little more than a simple courtesy call, a part of her duties across the Teach For All network. Only after would I find out that her visit to the cohort was apparently a small part of a much bigger campaign in the Philippines to call the private sector to prioritize education. It meant more, then, that her time with us was not a privilege speech or a lengthy talk, but a simple conversation, a trading of questions and answers that framed how we, as Fellows, were to begin our journey in June.

Before Ms. Kopp had arrived I had been struggling to reconcile my reasons for joining the program with the program’s intended vision. Having gone through Summer School made me aware of the selfishness of focusing on getting employed, becoming part of the corporate sector or finding opportunities abroad and becoming a great leader outside of the program. The way I had approached Teach For the Philippines was as a stepping stone toward something greater for myself, a stance inconsistent with the reality that faced me. So I strived to change my stance, and as a Fellow of the program, I became wary of the possibility that many of the statements espoused by Teach For the Philippines and its much bigger umbrella program were founded on little more than motherhood statements about educational inequity and poverty, not at all grounded in a recognition of these realities.

It would not be surprising, then, that the most striking part of our conversation with Ms. Kopp was when she told the story of one of her visits to one of the many locations of Teach for America (TFA). Instead of asking about test scores or growth or achievement rates, she asked whether the Fellows (corps members in TFA) had set kids on a better life trajectory. She asked the families in the area, community members, former students, co-teachers about the effects they perceived the program to have had; if the kids had more opportunities, if they were going to college, if they believed they could be the best at what they wanted to be. The question was not whether the corps members had become effective teachers or leaders, but rather, Has there been a difference in the lives of these kids, a difference in the life of the community? She then asked us to focus not on what happens to us after the fellowship, to not focus on ourselves, but rather to be effective in the two years given to us and become a difference that affects lives and people. Only then could we turn to what happens after and still keep in mind the people whom we have shared our lives with. Only then would we be able to make the decision to turn our futures into the future of something bigger than ourselves – that of the nation.

Her words struck me in a way that resounded with the Ateneo education that formed me, that created “men and women for others”, who engage and do far more than what is asked. I strengthened my resolve to not only be an effective teacher, but to be an affective teacher who cares about my students’ dreams, challenges, moments of happiness and sadness. I want to be a teacher who cares about where my kids will go in the years that come, and what they will do with their lives. While I am still unsure as to where I will go after the two years, I will use the time I have in the Fellowship program not thinking about my future, but thinking instead about how to get my kids to read, how to get them to learn and to love learning, and how their lives and the community I will teach in can be transformed.

In acknowledging some of the criticism lobbied against the model and against the organization, she admitted that when she started the program she, too, was uncertain about where it would go. This did not stop her from attempting to seek out the realization of her vision.  While the program is not perfect, and has not had the same effect everywhere, she points to the consistencies, strategies and techniques that have had an effect and can be universalized, leading her to establish Teach For All. The Teach For programs around the world are not panaceas or cure-alls to the problem of educational inequity and its root cause of poverty, but rather than confront the many-headed monster of poverty and say “there’s nothing that can be done” or “it’s a systemic problem that needs a systemic solution”, she sends the message that if at this point in time we’re not going to attack it in this way, how else and who else will do anything about it? Kung hindi ganito, paano? Kung hindi ngayon, kailan? Kung hindi tayo, sino? The programs, as are their Fellows or corps members or whatever they’re called, are incomplete, imperfect, problematic efforts – but they’re still real efforts that nobody else has cared to exert until now. It must not be forgotten that in uncertainty and incompleteness, there is room and possibility for growth, and I look forward with both caution and optimism to that growth that may yet come for Teach For the Philippines, Teach For All, and myself and my co-Fellows.

Something was very apparent, at least to me, in our conversation with Wendy Kopp: after 20 or so years, she is still very much invested in what she is doing. What I appreciated most about Ms. Kopp’s visit was aside from being a wonderfully simple person, she was aware of these uncertainties, of the growth that had yet to occur. I suppose a large part of the reason she was here was not to lecture and not to speak at us about the experience. She was here, as would any good teacher, to learn from the network, from the Philippines, from us, and to encourage us to make the most of the two years to learn more as well. I have a month to go before I begin my fellowship in June, and Ms. Kopp has reminded me, just in time, that I am here to grow not for myself, but for the kids who deserve the education that all kids deserve. Here to build a nation, I Teach for the Philippines.

Gian Karlo Dapul, 21, graduated from Ateneo de Manila University in 2013 with a Bachelor of Science degree in Chemistry. His favorite sports are competitive arguing and freestyle button-mashing. Follow him on Twitter @gkdapul.