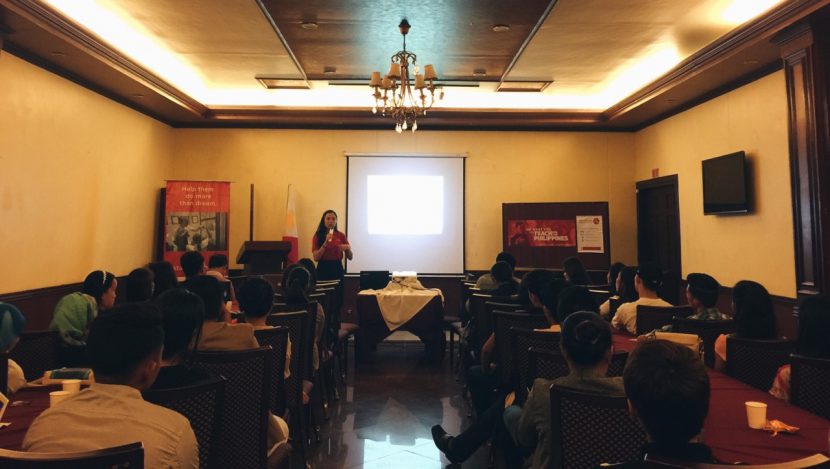 A year and seven months in, and I still don’t know how I ever landed this job.

A timid and self-conscious fresh grad hired to speak in front of large crowds, asking the brightest and most promising young minds to abandon their lucrative career goals for a teaching job in a public school? Heck, why would any timid, self-conscious fresh grad ever consider a job like that in the first place? Well, I did. And surprisingly, I was given the opportunity to pursue it.

Whenever I say that I work at Teach for the Philippines, people often assume that I’m a teacher. A number of my friends still think this, as I’ve always struggled to explain what I really do. They know I love being around children, so it makes sense that I’d become a teacher. What doesn’t make sense is that I actually get paid to speak up.

I was always the quiet one. Back in high school, I would sit with my friends during break times and usually eat in silence. Listening to them exchange stories, I would smile and nod, not wanting to attract attention to myself. I had accepted that I was socially awkward and had even developed social anxiety.

It’s been 6 years since high school, and I’m still uncomfortable in big social gatherings. But I’ve somehow been able to overcome my fear of public speaking because I’ve found reasons to speak up.

I speak up in the hope of bridging the gap.

In college, I was active in two organizations: one, a children’s rights advocacy group in UP, the other, a Catholic youth group in an affluent community. As my leadership roles in these organizations came simultaneously, I would often go from outreach programs in the overcrowded communities surrounding UP Diliman, straight to prayer meetings in the private gated communities of Makati. Jumping from one context to the other was unsettling and jarring. I felt as if I were living in two separate worlds with completely different realities. Though I regularly participated in outreach programs, I always felt uneasy after each one.

The word “outreach” connotes a divide – if there was no gap to bridge, there wouldn’t be a need to “reach out.” And at the end of the day, what really sets us apart? I could have been born into an overcrowded community and been on the receiving end of the dole outs or on the other side of the car window, knocking for loose change. We could easily fool ourselves into believing that this gap is “just the way life is,” but that feeling in our gut and our reluctance to look a beggar in the eye tells us that this is not the way it should be. We don’t choose the families we are born into, but we can do something about the gap. The occasional outreach just isn’t enough.

I speak up because there are stories to be told.

Each day that every one of our Teacher Fellows spends in their public school yields a story worth sharing. With a current total of 173 Fellows teaching for 2 years, that’s over a hundred thousand stories. And it’s not just our Fellows’ stories, but the stories of every public school teacher, student, school, and community that we interact with on a daily basis – stories of perseverance, grit, seemingly insurmountable obstacles, and ultimately, hope. These are stories that demand to be told, voices that need to be heard. These are the stories that define us as a nation. I’ve learned more about my country in the past year and seven months than I ever did over the course of twenty years and I couldn’t be prouder to be Filipino.

It’s never easy to speak up. Even after dozens of speaking engagements across the country, I still get jitters, and I’m still self-conscious. But I’ve gone from choosing to stay silent to needing to speak up.

Besides, it was never really about me.

Priscilla Relova graduated from the University of the Philippines, Diliman in 2014.  While in college, she was actively involved with UP Children’s Rights Advocates League (UP CRAdLe).  What is more, she continues to advocate for Children’s Rights and Equitable Education working full time with the Teach for the Philippines Admissions Team.  Ask her about her passion for the outdoors and sunrise hikes!  Photo below by (c) Nella Lomotan.