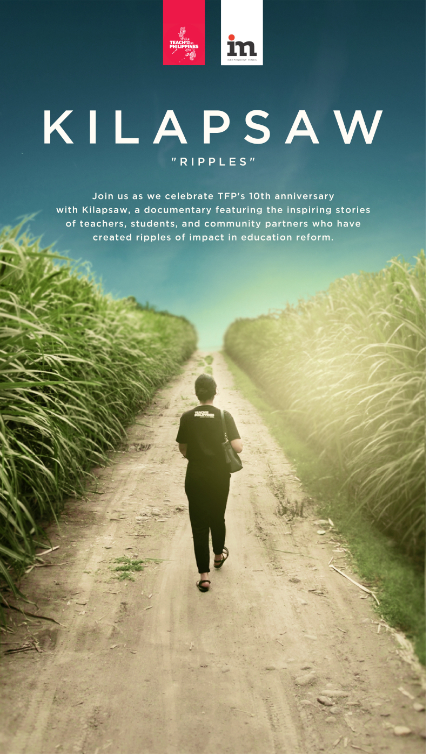 TFP marked its 10th year anniversary celebration through the production of documentary film, Kilapsaw. The film premiered in the PETA Theater, Quezon City last August as well as in Bacolod and Siargao last September. In celebration of World Teacher’s Day, TFP released the full documentary for public viewing.

Kilapsaw means ‘ripple’ – and having started as a small drop in the ocean that is the public school system, we have since created ripples of impact that have positively changed the lives of thousands of public school students across the country in just ten years.

Last August, Alumni, Program Participants, former and current Staff attended the premiere at PETA, Quezon City; gathering to share fond memories from their experience in the public schools, as well as to reconnect not just with each other but also to the organization’s mission and vision.

In September, we brought Kilapsaw’s stories of hope and perseverance back to the communities whom we engaged not just for the film production, but also in this decade-long movement to build the nation through education. The film aired in Cinematheque Center, Bacolod, Negros Occidental, where we were joined by our Program Participants as well as public and private partners from the cities of Bacolod, Himamaylan, Talisay, and Victorias whose support had been integral in our program expansion in the Visayas. The roadshow culminated in Bayay Numancia, Del Carmen, Surigao del Norte, where we met with Alumni Participants, former co-teachers, students, as well as local government and community partners; without whom, we would not have been able to leave our mark in the region.

More than just celebrating our 10th year milestone, Kilapsaw highlights the inspiring stories of teachers, students, and local community partners whose lives have intertwined with ours in the last ten years. It is through them – their belief, their support, their perseverance despite the odds – that Teach for the Philippines remains committed in ensuring that all Filipino children benefit from an inclusive, relevant and excellent education.