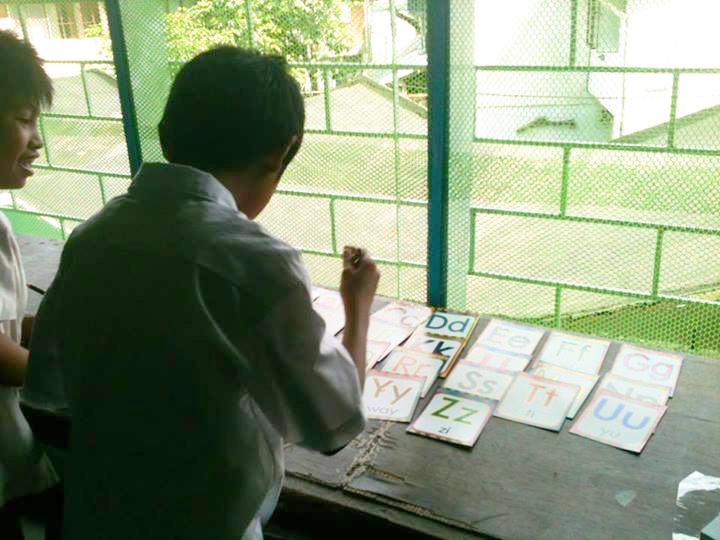 Last week, two of my 14-year-olds in my advisory class decided that they finally wanted to learn how to read. So many failed attempts preceded this wonderful moment.

Ever since the first week of class, I’ve been asking them to stay for remedial classes in order to teach them how to read but they always find a way to escape! They would hide under tables and slip out of the room in order to avoid me. Sometimes, they just would not attend class for days. They are in Grade 3 for the third time already and they seem to think that they will never pass Grade 3.

One of them told me, “Ma’am, bakit pa ako papasok e sigurado namang Grade 3 ako ulit“. (Ma’am, what’s the use of going to class when I’m surely going to be in Grade 3 again next year.) I found out that the reason they’ve repeated this grade level so many times is because after two weeks of going to school, they would stop and then just return again the following year.

I started walking them home to see the environment of their community. One of them seemed uncomfortable the first time I asked if I could walk him home. After all, he’s a big boy already. Maybe he isn’t comfortable having someone walk home with him. I tried and tried until he allowed me and that day he said, “Ma’am, malayo sobra. Ihahatid mo talaga ako? Baka pag napagod ka umalis ka na.” (Ma’am, I live too far away. Will you really walk me home? You might just leave once you get tired.) I said I wouldn’t and I showed him that I was not willing to give up on him. Yesterday was the third time I walked him home and our relationship in school has improved from there.

Last Thursday, my boys finally agreed to try to read for the first time this school year. They were no longer afraid to try. They were no longer embarrassed to show their younger classmates that they’re just starting to read letters. Instead, they looked at me when I said “Kay Teacher ka lang tumingin. Kaya mo yan” (Just look at Teacher. You can do it.) and they said their first “ba be bi bo bu”. It was a magical moment!

After that, they told me, “Ma’am, bukas ulit.” (Ma’am, let’s do this again tomorrow.) and on Friday, they reminded me that it was time again to read. It’s been six weeks since school started. I promised them we will pass Grade 3 together.

Beatrice Sheena Tan, or Bea, is the class adviser of III-Magalang and is one of four Fellows assigned to Apolonio Samson Elementary School.