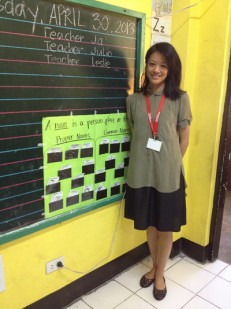 The following piece by Leslie Ferrer Espinosa of the 2013 Cohort was originally published in her blog, Tagalogue, and was reprinted with her permission on The FilAm, and GMA News Online.

I should have brought more tissues. I sat down and watched the presentation of colors, and that was a moment to take in. Two giant flags, one of the United States and one of the Philippines, stand aloft at the American Military Cemetery in Fort Bonifacio in Makati. I can’t describe exactly what I felt, but a thought sat with me all day… my two countries.

He was a Master Chief in the U.S. Navy, and he served for a total of 30 years. He would have stayed longer if he could. My dad was born here in the Philippines and became a U.S. citizen after joining the military. Being around the same uniforms today, made me so proud of everything he was able to do in his life. I miss him so much. I asked my Tagalog teacher in New York how to kindly say he passed away, and I liked this one the best: He is in heaven. Sumalangit na siya.

I listened to the different speeches about WWII and Vietnam. There was even a survivor of the Bataan Death March in attendance. Then I listened to the U.S. ambassador speak about the relationship of the Unites States and the Philippines — and what it means to serve. I have never felt so patriotic!

Through education I can help children realize their potential. For the FilAms back home, I hope you get to the Philippines sooner than later. My heart is full of love and I have a soul full of hope, so let the adventure continue. I wandered through the cemetery for a bit and found myself more inspired than ever.

I left the cemetery feeling humbled, getting one last glimpse of the perfectly aligned headstones, in the perfectly manicured lawns, with small, perfectly placed American and Philippine flags side by side.

Leslie Ferrer Espinosa, 32, graduated from San Diego State University with a Bachelor of Arts degree in Theatrical Arts and Technology. This June, she will be one of four Fellows assigned to Apolonio Samson Elementary School.