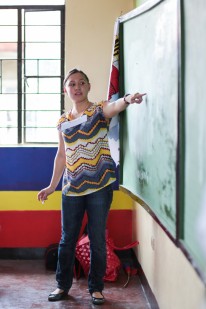 As the first week of classes comes to a close, Steffi Relampagos of the 2013 Cohort looks back on her first day as a public school teacher.

I believe that education is a right and that all children are capable of being someone big to help change our nation—regardless of where they come from, and despite what they’ve been through.  This is why I entered Teach for the Philippines.

During our Summer Institute, we were trained to make children believe in what we believe they can do. Personally, I took this to heart because I believe in the Filipino child. I made it a point to embed their dreams in their hearts, minds and actions as early as third grade. In Summer School, with the members of my teaching group, Kat and Adam, we addressed our students by mentioning their desired occupation first before their first name. Students who wanted to become policemen were called Officers, and the majority who wanted to be like us were called Teachers. That was our biggest investment in our students.

Although we only had a few students during Summer School, we found that the strategy we used was effective and that they started believing in themselves. This was why, on the first day of the school year, I had my students write their names on their name tags not just with their first name but also with their dream job.

I have students who want to be doctors, teachers, flight attendants, pilots, soldiers, policemen and even engineers. I call them by what they know they can and will be in the future—if they worked hard for it. I had to emphasize that learning is fun and that if they worked hard, they would eventually get where they want to be. I showed them what I was able to achieve through my medals and certificates, and told them that they, too, can be someone and accomplish things that seem difficult.

My first day was very fulfilling, but also very tiring. During recess (and we all know how handling the tray is a tough task during recess—especially for 50+ kids), I was caught up in the middle of a math dilemma with the pricing, selling, collecting and counting of the food and money on my tray. It was as tough as it was being a teacher; and in my head, I was even more stressed about being the class tindera (vendor). At the peak of my stress when a lot of children were telling me their classmates were misbehaving, or when I was still trying to figure out the procedure for buying and selling food, one of my Soldiers came up to me and said their classmate was outside by the fire escape. I told him to call that particular student and to tell him to come to me. I spoke to him for a rough 15 seconds, in the middle of the whole scenario. “Dapat bang nandoon ka? Ano ang dapat mong gawin? Ano ang gagawin mo ngayon?” (Were you supposed to be there? What are you supposed to do? What are you going to do right now?) These were three of the questions I asked in a serious tone and those of which he answered.

“Ma’am, bakit po iba kayo? Bakit po masaya?”, (Ma’am, why are you different? Why are you fun?) asked my eleven-year-old Soldier when he heard me let the boy go. At first I thought it was a bad idea that I just let him go without having to face a consequence. It made me think that maybe I should be stricter because that’s what these children are used to. Then, I understood what he meant. With a smile on my face, and with tears that were so hard to hold back, I said “Kasi masaya dapat tayong pumapasok. Masayang matuto. Kasi alam ko naman na matatanda na kayo, at kaya niyo na maging responsable. Alam ko na alam ninyo kung ano ang tama sa mali. Naniniwala akong magiging isang malakas at mahusay kang sundalo, handang lumaban para sa Pilipinas.” (It’s because we should be happy that we can go to school. It’s fun to learn. I know you are old enough and that you can be responsible. I know that you know right from wrong. I believe that you can be a strong and excellent soldier, ready to fight for the Philippines.)

Everything seemed to be better from there. It’s not easy at all. In fact, I was stunned at how no one said it would be this difficult. But, seeing their faces light up, and seeing how different you seem to them is the first step to helping them make dreams come true.

We all have a long way to go; but with hope, we can take things further one step at a time.