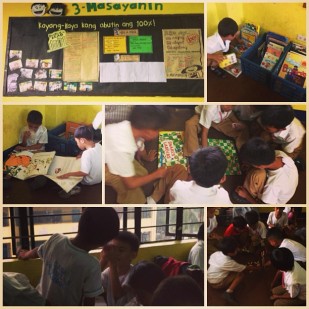 The following Experiences entry and the photos accompanying it were reposted with permission from the author’s original blog, which can be found here.

October marks the fifth month since I started working in a public school. One of the things I promised one of my former professors is that I will share whatever it is I’ve learned from this experience. Because I love this profession very much, part of my goal is to also encourage people (and not just those in the academe) to continue the conversations about the issues that surround our education system – be it in the private or public sector. So here are a few things that have been running in my head lately.

Emotions and social skills are clearly underrated – they NEED to be taught.

It’s one thing to be on the giving and receiving end of kindness, but to witness that kind of exchange among my students – PRICELESS. One recess time, one of my students who could read better than the others sat with a struggling reader so that they could read a storybook together. Though academic progress is going much slower than I want it to, I was amazed and proud that my students are starting to care for each other.

In my previous post, I described how the kids did not really know how to play or express themselves. I guess I want to put more emphasis on this issue. Research over the years have shown that emotional intelligence and social skills are key factors in helping children learn. According to the New York Times article, Can Emotional Intelligence Be Taught? :

“In the years since, a number of studies have supported this view. So-called noncognitive skills — attributes like self-restraint, persistence and self-awareness — might actually be better predictors of a person’s life trajectory than standard academic measures. A 2011 study using data collected on 17,000 British infants followed over 50 years found that a child’s level of mental well-being correlated strongly with future success. Similar studies have found that kids who develop these skills are not only more likely to do well at work but also to have longer marriages and to suffer less from depression and anxiety. Some evidence even shows that they will be physically healthier.”

And I believe that these are all true. Watching how my students behave has given me a deeper appreciation (call it a euphemism, but I prefer the term appreciation

) for the kind of society we have. Much of the negative aspects and behaviors that we see such as the lack of discipline, critical thinking skills among employees, accountability – I can now see where a huge chunk of these come from. And for each time that I’ve uttered this phrase in frustration – “Bakit ganyan? Parang walang pinag-aralan!”over a rude driver during traffic or an employee’s incompetence, I realized that I have my answer. Wala nga ito sa kanilang pinag-aralan.

This is not to say that values are not taught in schools. It is explicitly stated that we must include the teaching of values in the curriculum. But over the years, it seems to me that this practice has been somewhat lofty and theoretical. After all, how do you measure and assess behavior?

Some schools have actually created socio-emotional programs as described in this article, Teachers Use Social and Emotional Programs to Manage Classes.I agree that the children need to be explicitly taught how to express and deal with their emotions. In turn, teachers have to model thinking processes and concrete actions. Having a solid classroom management plan means going beyond rules, rewards, punishments, etc. I believe that teachers have to be more aggressive than defensive – and to me, this means relying a bit less on giving rules and lashing out warnings. The teacher has to create experiences and set the environment wherein kids will learn how to manage and deal with their emotions.

Angela Lee Duckworth’s TED talk on Grit also made me think about the kinds of praises and thoughts I would say out loud during class. What kind of values and attitudes did I appear to value as a teacher? What kind of environment am I setting up? Is it one that fosters perseverance or competition? Is it one that celebrates success AND failure?

These are the things that have been on my mind along with thinking of ways to bridge the academic gap. However, I realized that setting up the emotional landscape of my classroom is important because it will have a positive effect on my students’ learning outcomes. One of my struggles has been to create more opportunities for the kids to have positive experiences with each other. I know that they trust me and that I trust them – the gap is in helping them learn to trust each other. And if I have to be as tough as Coach Carter for them to realize that trust, I’d be willing to take the role. Tough love at this point, for me, means risking not being liked by them. A few months ago, I was asked the question what’s one unique thing I can bring into the classroom. My answer was: I like a lot of silly things that kids like that many adults find useless. At one point, I felt a bit embarrassed because everyone else talked about their talents and passion for helping children. But looking back, I realized that this trait has been my saving grace. Growing up in urban poor communities has robbed some of my students of a proper childhood – so I guess one of the more important things I can leave with them is to teach them how to be kids.

Marina Criselda A. Tanjutco, or Cris, 28, graduated from the University of the Philippines Diliman with a Bachelor of Elementary Education, Major in Special Education. She previously taught at a private school and worked for a children’s book publisher before being one of seven Fellows to teach in Holy Spirit Elementary School.

Why does education matter?  Click here to see what some of our champions have to say.