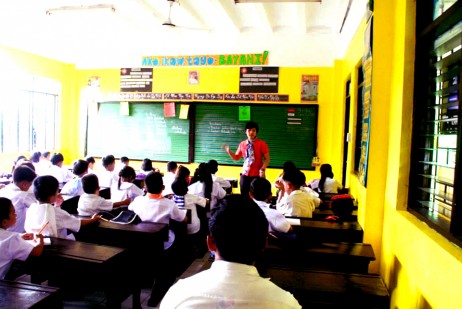 There are several stories I can tell you. I could retell my best days inside the classroom but instead, I chose to retell my worst day in 3-Campor.

My advisory class for S.Y.  2013-2014 was the last section of Grade 3 in the biggest elementary school in the Philippines. Majority of my students were overage for their grade (7 yrs.-17 yrs. old).  Among them were 2 boys, Jay and Elmer who made this day very significant.

It was the first Friday of the school year and I was trying to look the part of a real public school teacher, literally and figuratively. I wore a blue knee-length, smart casual dress that day.  I thought, this meant or showed I dressed for the part: presentable, respectable and in control.

Throughout the day, these two boys yelled curses and appeared to mean that these were academic answers to my questions.

I could not understand anything. There were questions in my head, some still unanswered to this day.  In particular, I struggled with defending my rights as a woman and balanced against my role as teacher of teenagers.

The next day, I spoke with their parents and dealt with the issue head on.  I began to understand that my students went home to a challenging environment, and I could not blame them fully for their actions.

Elmer, was abused by his dad and also constantly saw his mom abused.  Jay came from a poor family, with two brothers in prison.  After learning this, I started to create special projects and held one-on-ones for the first two months of the school year.  From 9am-12nn, I held subject and reading remedial classes and while doing so, also had the opportunity to talk to them on a more personal level.

They shared with me their dreams. Elmer wanted to be an engineer. He told me he wanted to construct houses and apply his math skills. Jay on the other hand, wanted to be an accountant or a police man, reflecting on his own personal dreams and the ones he had for his siblings.

Suddenly, the one-on-ones stopped working for Elmer. He stopped going to school and spent most of his time with his friends who were into drugs and other vices.  I visited his home three times and reminded him about our conversations, and his dreams.  The last time I visited him was on September 5, 2013.  On September 6, 2013, he came back to my classroom. He was unprepared, he did not even wear his uniform and he didn’t bring his bag. He just sat there, like a lost and confused boy looking for a place to feel safe.  I have not seen him since. I still wonder about his whereabouts and have so many unanswered questions.

Jay is a complete opposite story. Although at times the bully of my class, he has since become became responsible and loving. He became one of my top achievers in class. He became a sparrow, a student who taught me about unconditional love.

Allow me to share with you two things I believe every teacher should always remember.  First, learn to forgive yourself. You cannot help everyone. Like Elmer, in my story.  But do everything you can do. All you can do is hope and think about the day he might remember the things you’ve said.  Second, learn to love every day.  Loving means facing souls daily and understanding their whys. Italso means giving every ounce you have and believing it will be enough.

Why does education matter?  Click here to see what some of our champions have to say.

Note: Names have been changed to protect the students.