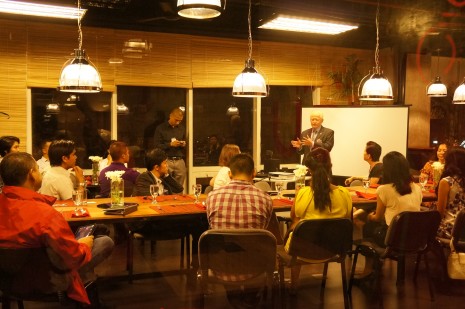 All ten delegates were flown in from the United States and Guam and participated in an immersive program in the Philippines last week. This involved having the chance to meet and interact with top officials and policymakers, industry leaders, members of the media, artists and cultural experts, entrepreneurs and innovators in different fields.

Representing Teach for the Philippines were Chief Executive Officer Margarita L. Delgado, Chief Operating Officer Clarissa Isabelle Delgado, Director for Admissions Patricia Feria, Director for Human Resources Evan Chen and Director for Marketing and Public Relations Jerome Intia, along with US Team Co-Directors for Business Development Michael Vea and Angela Lagdameo — the latter two having been part of the 2012 delegation of the FYLPro. Also present at the event were the Filipino-American Fellows of the 2013 Cohort: Adam Crayne, Lesley De Leon, Leslie Espinosa, John Navarra and Leah Villanueva.

The Teach for the Philippines program was not new to the 2013 FYLPro delegation as one of them, Edward N. Santos of New York, New York, is an alumnus of the Teach for America program, having worked with underserved students in East Harlem, New York. The Filipino-American Fellows had an opportunity to discuss the Teach For programs and their insights about it with Edward, as well as with both Mike and Angela, both of whom are also alumni of Teach for America.

Teach for the Philippines looks forward to a long and fruitful relationship with FYLPro as both organizations work towards the advancement of Filipino-American relations and realize the goal of education equity.