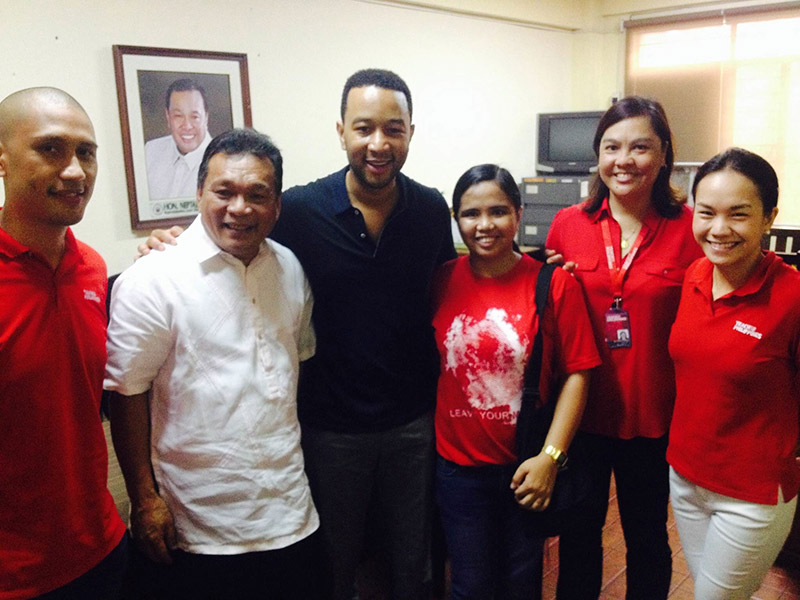 On September 26, 2014, the unsuspecting community of Barangay Highway Hills in Mandaluyong City received a pleasant surprise. Carving time out of his busy schedule on the day of his Manila concert, John Legend, R&B artist extraordinaire, came to visit Highway Hills Integrated School (HHIS), a Teach for the Philippines placement school.

Unknown to many, John Legend is also John Stephens, a proud board member of Teach For America. An advocate of education in many ways for many years, John decided to drop by the HHIS campus to catch a glimpse of the public school system here in the Philippines.

Upon his arrival on campus, John met with HHIS Principal, Mr. Romeo Bandal.

HHIS is an integrated school, which means that it has both grade school and high school levels in one campus under one principal.

Principal Bandal, along with HHIS Teacher Fellows Dave Mariano and Trisha Palaganas, led the tour of the school grounds and classrooms. The tour group was composed of several members of the staff and Executive Team of Teach for the Philippines, namely CEO Margarita Liboro Delgado, COO Clarissa Isabelle Delgado, and Chief Strategic Resources Officer Patricia Feria.

At one point, John stepped in one of the classrooms to sit among the students. To his surprise, the students started taking his hand and pressing it to their foreheads!

“It’s the traditional Filipino way of showing respect for elders, like the bow for the Japanese,” explained Patricia Feria, Teach for the Philippines Chief Strategic Resources Officer, to John. In the Philippines, children are taught “mano po” early on, and it’s a tradition reinforced by teachers in schools.

“We come from different backgrounds,” NDPES Fellow Karis Corpus answered, when asked what Fellows bring to the table, “And it’s from this diversity that we are able to see certain situations from a different perspective.”

“We’re not any different from our co-teachers in the public schools.” HHIS Fellow Clarice Fajardo supplied, “We actually exchange teaching techniques. I share engaging ways to teach a lesson to my co-teachers, and just recently, I learned several effective ways to manage my class from them! So far, the learning experience has been mutual for us Fellows and our co-teachers.”

Principal Bandal also expressed how the presence of Teacher Fellows in HHIS has helped decrease the number of pupils in the Grade 3 classrooms, “When they [Fellows] came in, we created additional sections in Grade 3 that the Fellows took over. Because of this, the average number of pupils for each Grade 3 class in HHIS is now around 35.”

During the discussion, John also shared how he was “a nerdy student”, skipped two grades, was homeschooled, and graduated high school at age 16. He loved to study, and if not for his other love—music—he would not have opened and connected to the rest of the world.
After finding out that a lot of the Fellows’ students were musically-inclined, he encouraged the Fellows to foster their students’ love for music; if possible, even incorporate music into the lesson.
“Don’t forget to love them, too.” John said, recalling parts of the commencement speech he delivered at the University of Pennsylvania last May. “What we need more in this world is for people to see others as people. Teachers especially need to see their students as people who need to be understood.  I know it’s difficult to care for each and every one of them, given how many they are, but at the very core, you have to show them you love them, because that is how they will grow up to be good people.”